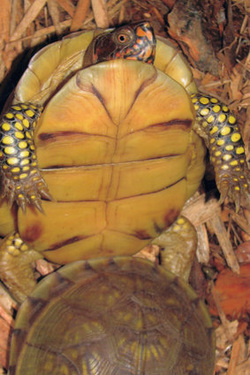 The process of breeding for turtles and tortoises is awkward, to say the least. Box Turtles take it to a different level. The following description is what I observed, and have provided photos below concerning the Eastern Box Turtle. Photo six, from the left are Three-toed Box Turtles, breeding.

The male will approach the female from behind, and attempt to crawl all the way up on her back. Males have cupped plastrons to fit the general shape of the female’s carapace. If the female is not receptive to the male, she will try to walk away or move in a way to affect his balance, and he will fall off. She may just move away immediately, if not interested.

If the female is receptive to the male, she will just stay in place. He crawls up and positions himself far enough forward, that his head and chin can reach the top of her head. Males have long toenails that are used to hook each foot under the side edges of the female’s carapace. As she pocks her head out, the male will push her head down lightly, with his chin. This occurs intermittingly, and as often as she allows him to do so.

Once he has gotten on top and has hooked his toenails under the edge of her carapace, the male will start to move backwards by releasing his hold, and by alternating his legs and toes he keeps a grip on her shell. This continues until he is nearly all the way back. He then releases his grip with both front legs and toes. He is standing vertical at this point, and only holding her by his hind feet and toenails.

The male is still not in the right position, for insertion. He must lean backwards another 45 degrees or more, depending on size, which raises up the back edge of her shell to locate her cloaca. Females have short tails, while males have longer tails (photo four, from left). He continues to move around until his reproductive organ aligns with the female (photo five, from left), and insertion is accomplished. This is usually a somewhat lengthy process. Once insertion is accomplished, the male can stay hooked up for a relatively long time.

When the male has successfully released his semen inside the female, he leans backwards even further and releases his hind legs and toenails, rolling over onto his back, upside down. He then uses his long neck to push himself over, to the normal plastron-down position.

It does appear that a male may prefer a particular female, and will not attempt to breed with a different female. So far, the males I have seen attempting to breed, don’t seem to have much interest in other females, especially within a short period of time.

It is a very interesting process to see. While breeding is awkward for most reptiles, turtles and tortoises have one of the greatest challenges. But, they somehow manage to get the job done, and fertilize the female.

So far, I have not gotten any eggs from the females that have been bred. I took two apart after a long time of insertion. The semen was gray in color, and a lot of fluid ran out of the female.

I can’t wait to get eggs, and hatch my first turtles and tortoises. When I was breeding African Fat-tailed Geckos (Hemitheconyx caudicinctus), only on two occasions was I able to catch the babies hatching from their eggs. Once the shell has been opened enough, the baby just comes right out. With the numerous species of snakes I bred, they were always very poky, and would pull their heads back into the eggs, when disturbed. This could happen numerous times, before they completely emerged.