Beginning of the Sanctuary 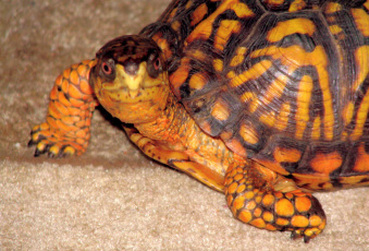 In 2010, I was invited to visit a friend of many decades in northern Iowa. He had started a Tortoise Reserve Sanctioned Sanctuary for turtles and tortoises. It was the first Turtle and Tortoise Sanctuary in Iowa, called Testudo International. Lynn De Vries is the Director.

Lynn is also affiliated with The Tortoise Reserve, operated by David Lee. I took a trip up to see Lynn and was amazed at what he had accomplished over the years. The Sanctuary was designed in the beginning primarily for Russian, Hermann’s, and Ibera Greek Tortoises, commonly referred to as Mediterranean Tortoises. He had other terrestrial turtles and tortoises, as well.

From 1971 through 1987, I had been working with all available species of lizards from around the world. Nearly 100% were wild-caught and no books had even been written on how to care for any reptile or amphibian. More information about my work with lizards, snakes, turtles, tortoises, and amphibians, can be read on my “About the Owner” page of this website.

In 1997, I woke up one morning with what would turn out to be a rare neurological disorder, called Dystonia. It is a neurological muscle movement disorder. For more than 20 years now, I have been fighting this disorder and its many changing symptoms.

Lynn used to come to my home to see the many lizards I was studying. As we walked around his Sanctuary and talked, it was obvious that we had a lot in common. He asked me if I would be interested in being a branch of Testudo International. At first, I didn’t know what to say. I had not worked with a single reptile since 1995.

During the 1980s, I did obtain a few box turtles, as well as rare aquatic turtles, and some species of tortoises. But my heart was still in the direction of lizards. I would often find myself trading turtles and other reptiles for a new lizard that just became available.

I went on the internet to see what other sanctuaries were doing as goals. It was obvious that each sanctuary was unique in different ways. I knew I wanted to work with box turtles again. I also wanted to work with a few other terrestrial turtle and tortoise species, as well.

I had the opportunity to buy a few Eastern and Three-toed Box Turtles. I really enjoy working with these turtles again.

Over the years, I have traveled around the U.S., looking for rare reptiles and amphibians. I got to see numerous terrestrial turtles and a few U.S. tortoises in their natural habitat.

I have always been interested in nature photography. I have been to nearly every zoo with a reptile and amphibian collection, and photographed their exhibits and species. I have included some these turtles and tortoises in my Photo Gallery.

Lynn encouraged me to start my own Sanctuary. I am more suited and defined by space to work with box turtles and a few small to medium-sized tortoises. I knew I would enjoy working with terrestrial turtles and tortoises again, but in a different way this time.

I plan to primarily work with box turtles of the United States and a few species of tortoises. I feel these species can be worked with successfully in Iowa’s changing seasons, both outdoors as well as indoors.

Several of the box turtles I have received were seriously dehydrated and malnourished. Some Eastern Box Turtles had neck abscesses, respiratory illnesses, as well as puss-filled closed eyes. My extensive experiences with lizards taught me how to deal with most of these health problems. I am also blessed with numerous veterinarians in the area who have worked with reptiles as well for many years. All turtles are healthy now.

I plan to make my Sanctuary a learning and research center for not only myself, but interested students of various ages. I feel it is important to work with all of the tortoises being sold in pet stores, including Russian and Red-foot Tortoises. Sooner or later, some of these tortoises will need a good home to finish out their lives, hopefully with me.

I will be captive breeding most species, excluding Ornate Box Turtles. They are a Threatened Species, in Iowa.

I will consider trading any surplus to obtain species of interest with other recognized sanctuaries around the world. A Wanted and Surplus List is on a separate website page.  I have also asked U.S. Fish & Wildlife Services to consider my Sanctuary for placement of any Chelonians needing a good home. I am looking for some Florida and Western Box Turtles.

Outdoor enclosures will be completed this spring. I plan to landscape our property over the next two years to keep the species separate. I am including a butterfly garden.

I know I have made the right decision because I am once again very excited about the opportunities working with terrestrial turtles and tortoises. I also looking forward to my new interest in working with some of the worlds biggest frogs and toads. I love to learn and I hope I can instill that same passion I have on others who want to be involved educationally.

I am not interested in working with aquatic turtles, native or exotic. I do keep a few turtles for my educational programs, which are always free.